Qurbani (Udhiyah) is the sacrifice of an animal performed during the days of Eid al-Adha, following the practice of Prophet Ibrahim (as). For only £70, Islamic Aid performs Qurbani on behalf our donors, in some of the poorest communities.

Qurbani (Udhiyah) is a practice commanded by Allah (swt)

So turn in prayer towards your Lord and sacrifice (animals). (108.2)

There is nothing dearer to Allah during the days of Eid al-Adha than the sacrificing of animals. The sacrificed animal shall come on the Day of judgment with its horns, hair, and hooves (to be weighed). The sacrifice is accepted by Allah before the blood reaches the ground. Therefore sacrifice with an open and happy heart. (Tirmizi, Ibne Majah)

The Prophet Muhammad (saw) was once asked by his Companions: (ra), “O Rasoolullah!(saw) What is Qurbani?” He replied, “It is the sunnah of your father lbraheem (as).” They asked again, “What benefit do we get from it?” He answered, “A reward for every hair (of the sacrificed animal).” “And (what reward is there for animals with) wool, 0 Rasoolullah (saw)?” they asked. “A reward”, he said, “for every fibre of the wool.”, (Ibne Majah)

When a person slaughters a Qurbani animal, he is forgiven at the fall of the first drop of blood, and verily, the animal shall be brought forward on the Day of Judgment with its blood, meat etc, and shall be increased in weight seventy times more than its own weight, and thereafter it will be placed on the scale of deeds. (Kanzul’Ummal) 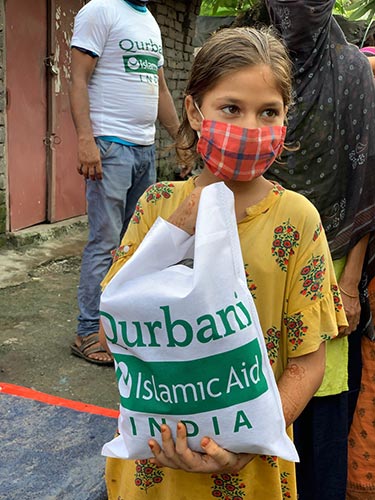 On whom Qurbani (Udhiyah) is Wajib?

Qurbani is wajib on every Muslim who is of sound mind, mature (who has reached the age of puberty), muqeem (i.e. he is not a Shar’ee traveler) and possesses the amount of fifty two and half totals of silver (612-36 grams) or wealth equivalent to that value which is in excess of one’s aslee (basic) needs. It is not necessary that this amount be in one’s possession for a complete lunar year. It’s possession during the three days of Qurbani will make Qurbani obligatory. Qurbani is not incumbent on a child or an insane person whether they own wealth equivalent to the amount above or not, nor is it wajib upon their guardians to perform it on their behalf. Similarly, it is not wajib on a Shar’ee traveler.

NOTE: A Shar’ee traveler is he who goes on a journey with an intention of traveling forty eight miles. He will be treated as a traveler as soon as he goes out of his town.

It is highly virtuous for one on whom Qurbani is not wajib to offer sacrifice for the Pleasure of Allah. He will be eligible for all the reward mentioned in the Ahadeeth.

If a traveler returned home or a person acquired the required wealth on the 12th of Zul Hijjah before sunset, it will be wajib upon him to perform Qurbani.

A traveler who makes intention of staying at a certain place for fifteen days or more, no longer remains a traveler. He must offer Qurbani if he possesses the prescribed amount.

It is permissible, but not preferable to perform Qurbani at night.

It is permissible to offer in sacrifice a goat or she-goat, sheep of all kinds, cow, bull, buffalo or camel.

It is necessary that the goat is one (full) year old, whether male or female. A cow, bull or buffalo will have to be two years old, and a camel five years. Animals that are younger are not suitable for Qurbani.

A sheep (of any kind) not less than six months old, so strong and fat that it appears to be one year old will suffice for Qurbani, otherwise it will have to be one (full) year old.

A cow, bull, buffalo or camel will suffice for seven persons provided no one’s share is less than one seventh and the niyyah (intention) of all partners is to attain thawab (for Qurbani), and not merely to obtain meat.

The Qurbani of only one person can be performed from a goat, sheep or ram.

If an animal seller says that the animal has reached the required age, and outwardly there is no sign to disprove it, then it is permissible to rely on his statement.

Animals that are castrated can be used for Qurbani. In fact this type of animal is preferable.

The following cannot be used for Qurbani

Animals that are blind, one-eyed or has lost one-third or more of its eyesight.

Animals that have lost a third of the ear or the tail. Similarly, the animal which has no ear from its very birth.

Animal whose horn has been broken off from the root.

Animal which has one leg lame to the extent that it walks on three legs only and is unable to use the fourth leg.

Animal so lean and thin that its bones have no marrow.

Animal so weak that it cannot walk to the place of slaughtering on its own.

Animal completely toothless or one that has lost most of its teeth.

It is virtuous to purchase the animal for Qurbani a few days prior to slaughtering and care must be taken in feeding and nursing it.

It is more virtuous to slaughter the animal with one’s own hands. If one does not know how to slaughter, it is preferred that he remain present while someone else is sacrificing the animal. It is not necessary to make the niyyah (intention) of Qurbani with the tongue, however it is necessary to say Bismillahi Allahu Akbar when slaughtering.

Use a sharp knife and slaughter the animal quickly so that it does not suffer.

Do not sharpen the knife in front of the animal.

After slaughtering, do not skin the animal before it becomes completely cold.

Do not slaughter one animal in the presence of another.

It is mustahab (desirable) for one who intends to perform Qurbani to refrain from cutting hair or clipping nails from 1st Zul Hijjah to 10th Zul Hijjah, (i.e. until after Qurbani). 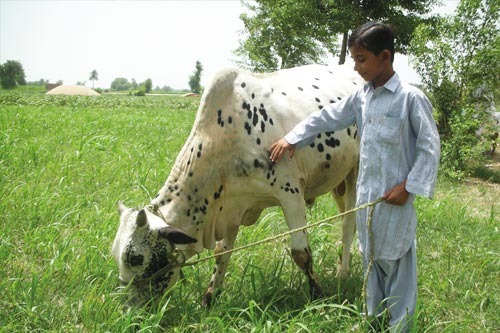 The Qurbani meat and skin

It is permissible to eat the Qurbani meat.

It can also be distributed to relatives and friends whether wealthy or poor, Muslims or non-Muslims.

It is better to divide it into three parts. One for the family, one for relatives and friends and one for the poor and needy.

The skin of the Qurbani animal can be kept for personal use, e.g. using it as a prayer-mat, water bag, etc.

If the skin of the Qurbani animal is sold, then it is wajib to give that amount in sadaqah to the poor (i.e. those who are eligible for Zakah).

It is not permissible to give meat, fat, etc. of the sacrificed animal to the butcher as his wages.

The meat of the animal slaughtered by partners should be shared by weight and not by estimation.

The rope, cover, etc. of the animal should be given away as sadaqah.

Qurbani on behalf of deceased

If one has been favored by Allah with wealth, then he should also perform Qurbani on behalf of Rasoolullah (sallallahu alayhi wasallam), his Sahabah, his Ummah, the Prophets and for his own living or deceased relatives, friends and teachers who have conveyed Deeni knowledge.

One should always remember and never overlook our beloved Prophet (sallallahu alayhi wasallam) and perform Qurbani on his behalf. Aboo Talhah ( radhiyallahu anhu) has related that the Prophet (sallallahu alayhi wasallam) sacrificed one ram and while sacrificing the other he said, “This is on behalf of every one of my Ummah who believed in me and testified (to my prophethood).” (Tabrani)

It is a matter for deep thought and consideration that the Prophet (sallallahu alayhi wasallam ) kept his Ummah in his mind while offering the sacrifice and it is deplorable for the Ummah not to remember him at the time of Qurbani.

Q1. Who is exempt from Qurbani?

People who are not mentally stable, those who have not yet reached and passed puberty, those who are travelling and are away from home (approx 40-45 KM) and those who do not possess 52.5 tolas of silver, or equalling wealth.

Q2. What are the rules for Qurbani?

Every eligible Muslim should provide one share of Qurbani and parents should provide a share in the name of their children. One small animal such as a goat or sheep is equivalent to one Qurbani share, while a cow or camel, is equal to seven shares and can be split between seven individuals.

Q3. Ruling on eating all of the Qurbani or giving all of it in charity?

With regard to the Qurbani that you gave entirely in charity, that is acceptable according to all scholars.

However, if you ate the entire Qurbani, and did not give any of it in charity, you have to buy some meat, even if it is only in small quantity, and give it in charity to the poor, to compensate.

Q4. Is there an alternate to Qurbani? I’m a vegetarian so I don’t agree with giving the money to spend on meat or the slaughter of an animal?

Being a vegetarian is a personal choice, and is permissible in Islam.

Similarly eating meat is also permissible but not mandatory.

Q5: What should be the condition of the animal for Qurbani?